Final Day at the Worksites 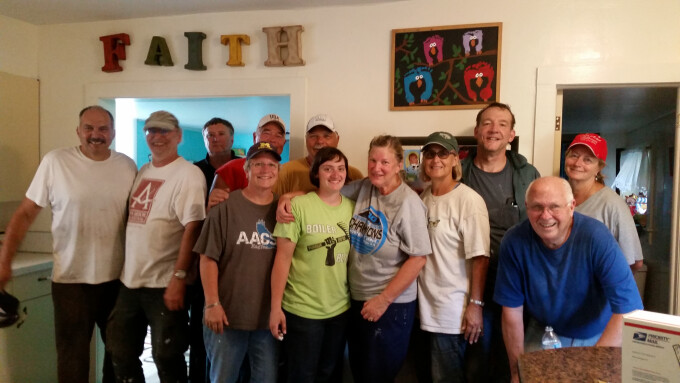 Today was the final day at the worksite. We were split back into three different teams. This morning's devotional was about shoulder taps.

At Wendy's for the last day to finish up the project we had started. There was still a lot that had to be done and some were worried about being able to finish everything. We all knew that it could be a late night trying to get everything finished up. When we arrived, Bruce put up a new kitchen light fixture first thing in the morning and then spent the rest of the morning finishing painting the kitchen.  Ed, Joe, and Carlos spent their morning putting on the Ice and Snow (Weatherwatch) on the back roof and finished covering the chimney. Dick and Matt finished hanging the rest of the cabinet doors. Making sure each of the doors opened and closed properly, which often meant changing the location of the hardware.  They also hung the door to the basement. Both the bathroom and basement doors had hooks attached to the outside to help keep Hayley out. Dick and Matt hung wood in front of the crawlspace door and then added some insulation. Of course it wouldn't be a mission trip without B and Kaitie burning again. They spent a few hours in the morning burning all the wood that came out of the basement and the wainscoting from the kitchen.

B spent hours cleaning silverware, kitchen cookware and knick-knacks. Unfortunately, there is no hot water so this meant microwaving bowls of water every few minutes to get water hot enough to wash everything.  Kaitie weatherproofed the new gate on the deck and the mailbox post.

After lunch Ed, Joe, and Carlos loaded up the trailer full of the trash we had created and the trash that came out of the basement and took it to the dump.  This trip took a little longer than anticipated because of the many stops to load the trash back on after it had blown off. Several drivers were polite enough to stop and yell at them for scattering debris. Kaitie nailed in the trim for the bathroom floor and put up a new bathroom light fixture. She also scraped paint off the window after it had dried.

At the end of the day the other two teams had finished their work and came over to Wendy's to help us finish up.

Bruce and Dick put down the linoleum in the kitchen.  The island and the side cabinet were moved in and Kaitie helped screw on counter-tops. Pam and B cleaned and scrubbed and scrubbed the counter-tops to get the years of grime off.  They scrubbed so much they thought the stars were going to come off the counter design. Pictures and knick-knacks were hung back on the walls. Matt, Sharon, and Tammy were outside putting up the siding that covered up the crawlspace door.

Once the guys came back from the dump, it was all hands on deck to pick up all the shingles off the ground that had come from the back roof. Shingles were put in the trailer for Mike to haul away. Bruce put an air vent in the sewer line for the toilet and the sink.

Back to the Habitat Restore for our last day to complete as many projects as we can. First things first -- move the scaffolding. Ugh... a very heavy and somewhat dangerous operation. Disassemble and move to the side door area where Paul sanded a huge white square patch to prepare it for painting. Paul and Pam spent a lot of time on the scaffolding today. Priming and painting the big white square area and the blue gray trim that surrounds it. Also, Pam and Cheryl finished up some windows on the parsonage. Sharon and Cheryl were able to scrape, prime, and paint the front windows of the church. Steve caulked as many cracks as he could find. It should keep the air, water, and bugs out much better now, plus it looks a million times nicer. Steve gave one of the giant church windows a second coat of paint. Tammy scraped, primed, and painted the trim around the entrance portico. Steve and Tammy put up some new brackets for a gutter. Steve also caulked a giant hole at the top of the portico. Small children could have fit through that thing. Now it looks like new. Thanks Steve. Sharon also helped on the portico and the front windows. At around 2pm we started the clean up process. Steve and Cheryl ran the shopvac and we all helped carry scaffolding and ladders back into the church and clean as many paint brushes as we could. At around 3pm we left Paul and Pam to finish up their doorway project. The rest of us went to Wendy's to help with whatever else needed to be done. Picking up roof pieces and nails, putting siding back, cleaning windows... you name it. It was crunch time.

Carl and Sue were back finishing the shed for Habitat for Humanity in Eagle Harbor.  They sided 3 of the sides of the shed and put the trim pieces on the outside. The shed is made in pieces so they can move it and assemble it at the home Habitat is working at and then they leave it there for the new homeowners. They also built 2 barn doors. Carl and Sue were lucky they didn't get eaten by the neighborhood bear seen by the homeowner's daughter and dog.

After a long day's work everyone went home and showered so we could meet downtown at the Ambassador's for pizza. It was nice to relax at the end of the day and share many laughs with each other.